Semtech Corporation and IBM Research Center in 2015 presented a LoRaWAN protocol (Long Range Wide Area Network) to the wireless technology market. They performed one new open standard net protocol which was more competitive with Wi-Fi and cellular networks. The main advantage of LoRaWAN is deployment of a bidirectional M2M communication with maximum energy efficiency.

Non-profit organization LoRa Alliance was established by several famous electronic manufacturers, such as IBM, Semtech, Cisco, Kerlink, IMST etc., and leading telecommunication operators Bouygues Telecom, KPN, SingTel, Proximus and Swisscom in order to support, develop and standardize the new technology. The implementation of this standard provides easy and fast device integration with IoT for individuals or organizations and can be supported by telecom operators.
Developers from LoRa Alliance define LoRa as a modern superior technology in comparison with regular cellular nets or Wi-Fi due to its spread deployment up to 20 km and high speed up to 50 Kbit/sec with a minimal energy use. Thus, the battery AA type lifetime can be sized in many years.

The main features of this technology allow using LoRa devises almost without limits in such spheres as: local or private automation, industry, smart cities, power industry, health care and etc.

Structure key elements: end nodes, gateways, network and application server.
End Node — a chain of control units and measuring sensors. The main (implementation) functions are control and measurement.
Gateway/Concentrator — a receiving framework which performs communication between end nodes with further transmission into a transit network via the channel. The most common examples of such networks are: Ethernet, WiFi, cellular networks and similar telecommunication channels.
End devices with a gateway are forming a Star network. This structure type consists of multi channel transceiver devices which are processing signals from one or several channels. Thus, various equal devises provides network coverage and a bidirectional data transmission between end nodes and a server.
Network Server — a control center for network management. It helps to set scheduling, bitrates throttling, analyzing, received data processing and storage.
Application Server — a software framework that provides data gathering from end nodes and remote operation control features.

The LoRaWAN Star network forming communication bridges with a net server through the gateways.
Such architecture implies that the central server and gateways are owned and managed by the operator whereas the end nodes by clients. Thus, the client receives clear, safe and bidirectional data communication.
To provide the maximum security and confidentiality of transmitted data in LoRaWAN global network, the developers use AES-encrypting system at the different levels, such as: 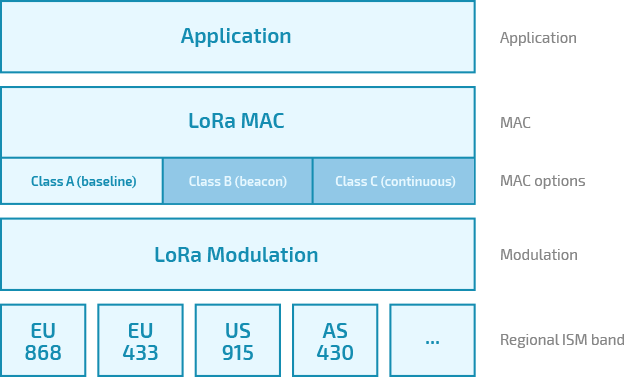 According to Semtech, one LoRa-gateway can maintain up to five thousand end devices due to:

It could be said that coming out of a low-power wireless LoRaWAN technology gave an opportunity to create a global infrastructure with easy network communication and a big amount of connected end nodes. The distinctive advantages are long range, low power, capability for dense urban environments and indoor coverage.